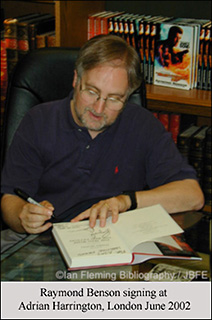 Born in Texas in 1955, Benson is a novelist, short story writer, composer, dramatist and software designer. In 1984 Benson demonstrated his interest and knowledge of James Bond in his debut book The James Bond Bedside Companion, an Edgar-nominated critical work on Ian Fleming and the 007 franchise. In 1996, Benson was chosen by Fleming's literary copyright holders to succeed John Gardner as the official James Bond author. In total he produced six original novels, three film novelizations and, notably, was the first Bond author since Fleming himself to write short stories (three in total) featuring the secret agent. Another similarity to Fleming was his introduction of a ruthless terrorist organization called 'The Union' (like the earlier SPECTRE), which featured in a trilogy of novels- Fleming had memorably written 'The Blofeld Trilogy' in the early 1960s.