A comprehensive description of Ian Fleming's literary oeuvre that ranges from the first draft of Casino Royale in 1952 to editions still being published sixty years later. Unparalleled in scope and scholarship, this is a critical reference book for fans of one of the twentieth century's greatest thriller writers. 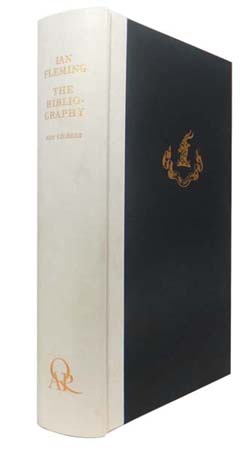 Ian Fleming was a journalist, publisher, travel writer, motor enthusiast, card player, accomplished golfer and noted bibliophile, but above all he was the creator of secret agent James Bond 007, an icon of popular culture.

Much has been written about Fleming and his legendary creation, but until now there has been no serious bibliographical account of his published work. Ian Fleming: The Bibliography is not only an indispensable source of information for collectors, enthusiasts, libraries and booksellers alike, but an entertaining and informative volume that will appeal to anyone interested in the James Bond phenomenon. It covers every aspect of Fleming's writing, from the manuscript stage, through typescripts, uncorrected proofs, advance and review copies, first and subsequent impressions, paperback printings, omnibus and collected editions, as well as periodical appearances, comic strip adaptations, young reader and large print editions published in Britain and America.

There are sections covering Fleming's more obscure literary endeavours, as well as his published reviews and interviews. Each main entry includes an engaging narrative on the conception, editorial process and marketing of the novel, complemented by a full list of source books.

Biographies of Fleming's closest confidants are provided, and a detailed chronology of the author's life completes this bibliographical masterpiece.

The work is compiled with the approval of Ian Fleming's literary estate and the assistance of the Ian Fleming Foundation. 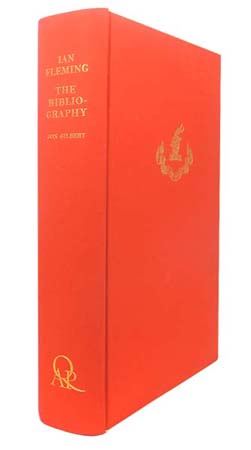 Jon Gilbert is perhaps the foremost expert on the works of Ian Fleming and the literary history of James Bond. Through Adrian Harrington Ltd, he has become an internationally renowned dealer in rare Fleming material. Ian Fleming: The Bibliography is the result of both a career immersed in the writings of Ian Fleming, and three years intensive research following Fleming's centenary year in 2008.

Winner of the 2014 ILAB-Bresauer Prize

Ian Fleming: The Bibliography was awarded the 16th ILAB-Breslauer Prize in 2014. Presented every four years to the most outstanding scholarly book about books, it is the most prestigious prize in the field of bibliography.

Hardback, 700 pages with over 1000 illustrations (many in colour), originally available in standard and deluxe editions. The text is set in Albertina font and is printed in two colours. ISBN: 978-0-9558189-6-7. 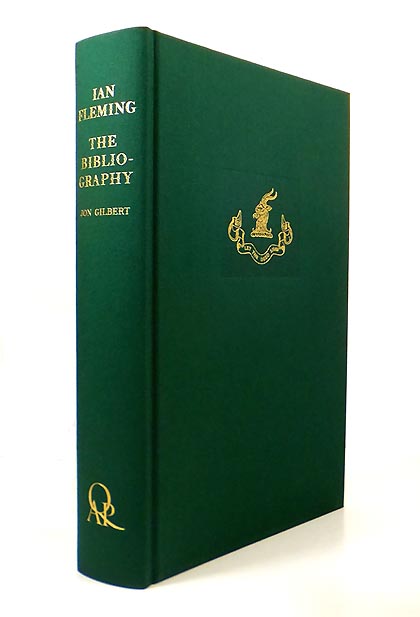 The Standard Edition is handsomely bound in red-coloured Ratchford's Colorado book-cloth, with Ian Fleming's crest stamped in gilt to the front cover, with lettering in Fry's Ornamental type to the back-strip. This type was Fleming's own choice for the printed title page and jacket wording on his debut novel Casino Royale, as published by Jonathan Cape. Price: £175 SOLD OUT

The Deluxe Edition is limited to 250 numbered copies and features an elegant quarter binding with gilt ornament and coloured endpapers, in keeping with The Complete Works of Ian Fleming (Queen Anne Press, 2008). The design is inspired by the original special edition of On Her Majesty's Secret Service (Jonathan Cape, 1963). Price: £250 SOLD OUT

The 2017 Edition features some textual revisions and a handsome new binding of 'racing green' cloth, reflecting the colour of James Bond's supercharged Bentley, and being the same cloth used for the Queen Anne Press 50th Anniversary edition of 'Chitty Chitty Bang Bang' in 2014. Price: £175